Ed DePriest, is originally from Middle Tennessee. Ed and his wife relocated to Marietta in 1999 because her family is from the area. He grew up in very rural Tennessee so everyone was self-reliant when it came to building whatever they needed. Family members and neighbors taught one another the skills necessary to be self-sufficient from a young age.

Ed’s high school offered the Trades & Industry class. The T&I class had either a mechanical focus or a building focus. Ed chose a building focus, and with his classmates, built a greenhouse for the agricultural club. They started the project from scratch, laying the block and installing fiberglass panels on the frame they built.  This class helped lay the foundation for Ed’s future.

A Solid Foundation of Construction Experience

Ed has worked in construction for more than thirty years. He started out working for a custom home builder. He had to do every task on the jobsite, from cutting trees on the property, to roofing—it was like a crash course in building. Working in custom home building gave Ed the opportunity to learn every angle of the building process.

For approximately 18 years prior to working at ADB, Ed performed construction supervision and punch work. He progressed into the supervisory role due to the length, and extent, of his experience, and his sharp eye for detail. Ed still enjoys the building process. Part of his management philosophy is that he wouldn’t ask his crew to do anything that he wouldn’t be willing to do, including ditch digging. “It’s noble to say that, until you’re in the ditch,” he joked.

Ed’s previous experience doing punch work honed his ability to spot any errors or incomplete tasks left at a project’s completion. He inspected completed homes and repaired or finished anything that was not up to his high standards. His great attention to detail is still a wonderful asset as part of the ADB team and it serves him well in the role of Project Manager.

The Strongest Link of Communication from Clients to Crew

END_OF_DOCUMENT_TOKEN_TO_BE_REPLACED

Atlanta Design & Build (ADB) is one of a handful of companies nationwide to have achieved certification as a NARI Accredited Remodeling Company (ARC), and the first ARC in the state of Georgia!

The National Association of the Remodeling Industry (NARI) is the only professional organization for remodelers in the nation with a system of accreditation for top businesses. With its heartbeat and primary purpose being to “raise the bar” for what homeowners can expect from a remodeling contractor, NARI has provided opportunities for networking, mentoring, training and development for individual members and their employees since its inception. As the first of its kind, the NARI ARC program was created to support both consumers and remodelers by providing a company designation in addition to individual credentials.

Consumers desperately need a professional remodeling contractor they can trust to update their homes. NARI remodelers need a program that supports remodeling companies in the continuous improvement of their business, following best practices, and elevating the level of professionalism in organizations throughout the nation. In order to be considered for this recognition NARI accredited companies must demonstrate how they meet a set of higher industry standards determined by a third-party, the NARI Accreditation Board; for example, ARC companies must demonstrate:

END_OF_DOCUMENT_TOKEN_TO_BE_REPLACED

We are pleased to introduce ADB Project Manager, Greg Medinger. Originally from Iowa, Greg grew up on a farm. He was drawn to the construction industry in high school where he took several wood and metal shop classes. In addition to working on his building skills, he enjoyed sports, running track and cross country all four years of high school and playing football during his senior year. After high school, he attended a technical college in Iowa where he studied Business Management.

In 1985, Greg moved to Duluth, Georgia where he began in the construction industry with a company that hired him to do framing work. He later decided to establish his own framing company. Unfortunately, his business launch coincided with the construction industry recession, and his company went out of business. Greg returned to framing, working for a builder who specialized in building decks. Greg contracted with his new boss to become his Superintendent for four years. He was in charge of getting subcontractors to their job sites and supervising them throughout the project.

Greg decided to search for a better job in February 2018. When a recruiter called him about a position with Atlanta Design & Build; he was ecstatic. He interviewed with Dale Contant and Jamie Franks and was delighted to receive “the call” hiring him to work with us. Greg had already moved to Marietta a year and a half prior to getting hired. He now enjoys a perk coveted by many—a work commute of only a few miles.

END_OF_DOCUMENT_TOKEN_TO_BE_REPLACED

At Atlanta Design & Build we pride ourselves not only on our commitment to enriching our clients’ lives, but also enriching the lives of our team of employees. In order to provide our clients with life-changing services, we employ construction industry professionals who are always striving to learn more about their craft. This is one reason we appreciate The Cutting Edge: Remodeling Education Expo hosted annually by the Atlanta chapter of the National Association of the Remodeling Industry (NARI).

At The Cutting Edge, our team members earn six hours of continuing education credits towards meeting the requirements for earning or renewal of their NARI certifications. At this year’s expo in Atlanta, our team attended continuing education classes in vital topics such as, expediting job permits, enhanced customer care, and designing with the latest materials and techniques. Victoria Downing, President of Remodeler’s Advantage, delivered the keynote address.

An investment in our people is an investment in our clients and their future projects. We value the opportunity The Cutting Edge makes for our team to gain important knowledge in such a convenient way, all in one day, so they can quickly get back to renovating our clients’ projects into a reality beyond their dreams! Our team members have proudly earned the following NARI certifications: Master Certified Remodeler, Certified Kitchen and Bath Remodeler, Certified Remodeling Project Manager, Certified Lead Carpenter and Universal Design Certified Professional.

Learn More About Our Mission

Atlanta Design & Build gives a hearty welcome to our newest employee, Caio Nunes. We are very pleased to have him on our ADB team!

Caio (pronounced Kyle) is originally from Brazil. Construction has been his passion since childhood.  For the past 14 years, he has honed his skill and expertise working with hardwood flooring.

Caio and Sydney Contant met through friends and have known each other for 10 -11 years, right around the time she started working for ADB. His quiet demeanor brings to mind the adage, “still waters run deep”.  Sharing many common interests; sports, the outdoors, working with their hands and carpentry, to name just a few, their friendship continued to blossom culminating with their wedding in June, 2017.  When ADB’s recent hiring need arose, we looked no further than our own backyard to find the needed team member.

Caio has been working as a Carpenter Apprentice since October. His construction background and skillset equip him to be an asset to the team.  “My work with ADB involves helping the guys,” Caio explains. “I learn as I go, hands-on. I want to take it slow and learn everything completely. I eventually want to get my license to be a carpenter, but I also want in-depth learning from experience, not just book learning. I haven’t yet worked with ADB long enough to stand back and admire a project from start to finish, but at the end of each day I’m proud of what I’ve accomplished. This work is my calling and I enjoy doing it so much!”

Caio appreciates the professionalism of ADB, and also likes the family environment. He notices that Dale Contant is very considerate of his workers and treats them like a part of his family.

Outside of work, Caio still enjoys sports, and camping.  He especially enjoys spending time with Sydney.  Having purchased their first home, Caio and Sydney Nunes are planning to raise chickens in their backyard.  Even more exciting, they are now anticipating the arrival of their new baby boy. They are elated at becoming parents.  Dale and Keely are also thrilled to be first-time grandparents.  We look forward to sharing pictures in our January edition of our eNewsletter, HOMEStyle Online. 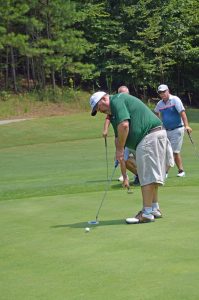 The 9th annual NARI Atlanta Golf Tournament in August was an overwhelming success. Atlanta Design & Build would like to express our pride in and appreciation to Steven Roberts, Sales and Design Consultant.  Not only was Steven part of the team that won the 2017 event, and with his new team placed third in this year’s event, he was this year’s event Chairman. This is his third year of involvement in some level of planning for the tournament, and his first year as Golf Committee chair.

The golf tournament was held at Bear’s Best in Suwanee that boasts a collection of Jack Nicklaus’ favorite golf holes from Nicklaus designed courses around the world. The planning committee consisted of four other NARI members and also received a tremendous effort from NARI Atlanta’s new Executive Director, Kathryn Stempler. Steven and the other committee members met their goal of obtaining participants in each category. The event enticed over 50 golfers, 18 hole sponsors and a handful of other trade partner sponsorships to participate.

“Steven was able to secure sponsorships for all 18 holes, lunch, and the beverage cart, again far exceeding what was accomplished last year,” Kathryn Stempler remarked. “Steven was creative and motivated in his determination to obtain more sponsorships and more golfer registrations than in 2017 and his hard work really paid off.”

“We had great participation this year,” agreed Steven. “Sponsors, volunteers and especially the players turned out in numbers we have not seen in years!”

Steven eagerly accepted the chair position this year and is looking forward to continuing his involvement next year due to his love for the game and interest in helping NARI grow and prosper. He hopes to improve the tournament at all levels next year with the continued participation of the committee members and the support of Kathryn.

“We are looking forward to the 2019 event which we have decided to move to the first week in October,” Steven explained. “We are excited about the new date and believe playing in the early fall will bring even more interest and participation to this annual event.”