We have been featuring a stunning lake house project Atlanta Design & Build recently completed. First, we focused on the dock and boathouse, and then on the home exterior. Part 3 gave you the pleasure of roaming inside the fabulous upper level of the home. We conclude the series here as we venture inside the terrace-level to share its incredible design metamorphosis.

Originally, the terrace-level interiors were dark and offered very little living space. Our clients envisioned a large wide-open space with a welcoming fireplace in the middle, as in their upstairs. Our ADB team installed the biggest, open, double-sided direct vent fireplace available. The sunroom addition provides the homeowners a bright space to work on art projects and other hobbies. It is the perfect location for the kids and grandkids to play, with simple, durable and easy-care finishing materials. Each of the two bathrooms are unique and beautiful with floors and walls of tile in a soothing earth-tone color scheme. This terrace-level interior, along with the adjacent outdoor patios, is the ultimate area for large-scale entertainment and hosting parties lakeside. 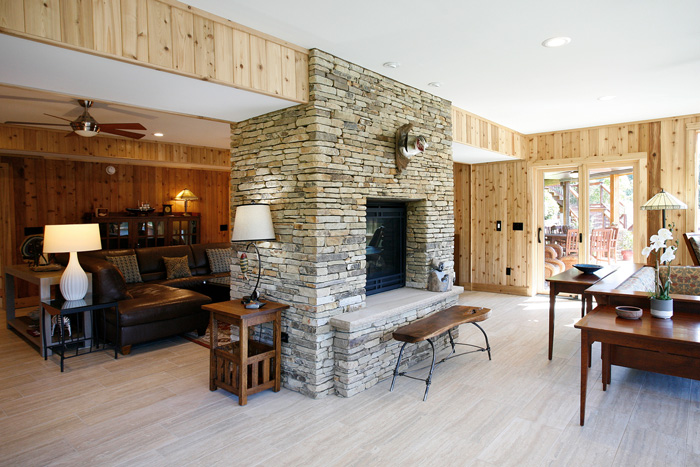 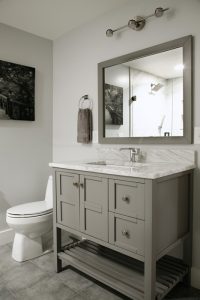 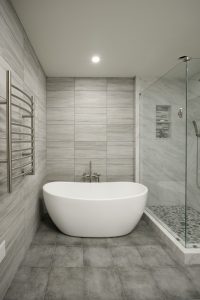 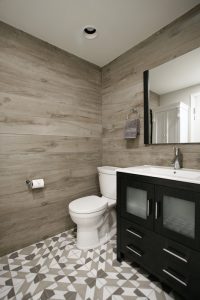 The extensive glass windows in the addition provide an abundance of light and a gorgeous panorama of the lake. Our team enlarged the concrete / flagstone patio, added an underdeck system, and stacked stone to posts creating an inviting and comfortable space for all.

The project was not without challenges; the terrace level walls not matching the walls of the main level above, and the floors of the existing structure not being flush with the new.  ADB accomplished a seamless transition from the existing to the new sunroom. Jamie Franks, Sr. Project Manager, stated, “We’re pleased that everything is functioning well and the appearance is impressive!”

Our clients are thrilled with their finished project. “Atlanta Design & Build is an amazing company for doing extensive, complicated, design-intensive remodels!” they expressed. 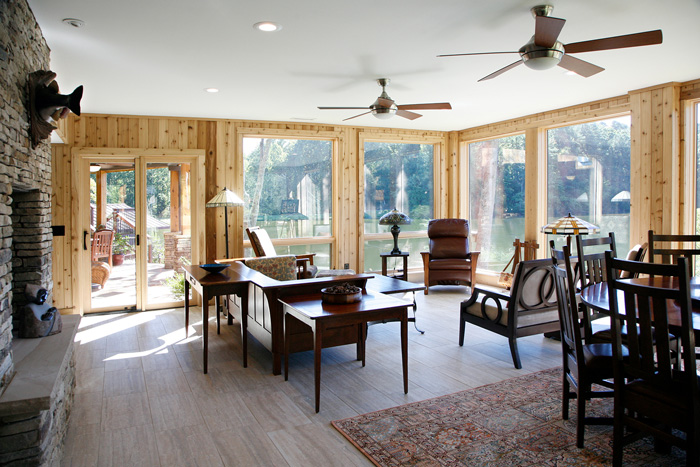 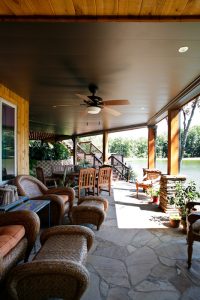 See the other project aspects like the dock and boathouse, and then the home exterior. Part 3 gives you the pleasure of roaming inside the fabulous upper level of the home.

One of Atlanta Design and Build’s favorite projects this year is a spectacular lake house renovation in Marietta. Previously we described the beginning stages that included a new retaining wall, dock and boathouse. Read on to see the project continuation of a large addition that transformed the original 1983 structure into an up-to-date dwelling.

The clients’ original desire was “to redesign the living room and extend it with an addition with high ceilings and large windows to open up the house to the lake view.” We partnered with Robert W. Platt, AIBD, the principal residential designer at Habitations, LLC., to engineer the plans for the new addition according to our clients’ vision.

“The natural wood exterior was in remarkably good condition,” Robert says. “Obviously the homeowners took very good care of it. The existing home projected a classic lake look, with V-joint tongue and groove vertical cedar siding and soffits in a clear finish. The homeowners wanted the new portion to blend with the existing so that it appeared to be part of the original building.” 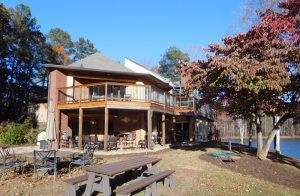 An old, pre-engineered glass solarium on the back of the house was replaced and the shallow room beneath expanded outward 15 feet. Originally, the lower level downstairs included large expanses of glass. The bottom section was a two-foot tall awning window that opened out, with a five-foot glass window wall above it. The floorplan rotated around a central fireplace that acted like a pillar spanning from the basement to the roof. The homeowners wanted open double-sided masonry fireplaces on all levels. 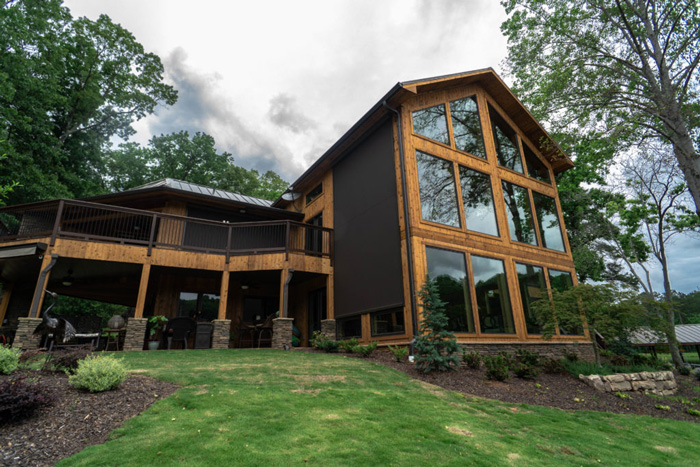 Our clients envisioned a high vaulted ceiling with open beams in the living room. The existing living room ceiling was much lower, vaulted only in one direction, and no open beams. “We cut out the vault inside the house and took the roof off the living room, extending the house out 15 feet,” Robert describes. “The new space and the existing space were treated as one single, enormous room with one roof covering it.”  The new vault is more conventional, vaulting in two directions like a traditional church building. This gave the space tremendous volume. The new roof was about five feet higher than the surrounding roofline, which gave opportunity to install clerestory windows, providing lots of light to the living room.

The exterior glass wall facing the lake is three stories high and required an unconventional device for safely holding up the heavy extended roof. “Inside the wall is hidden a very incredible, sophisticated steel moment-frame,” Robert explains. A steel moment-frame is an assembly of I-Beams and columns, rigidly joined together to resist lateral wind and earthquake forces without the assistance of additional braces or walls. Robert continues, “We designed it and it was built by Simpson Moment Frame, fabricated to very close tolerances. It was shipped in several pieces, put together on site, and then bolted to the concrete floor. This is the first time we’ve ever used this type of frame, but we are very excited about it. It will keep the homeowners safe forever!” 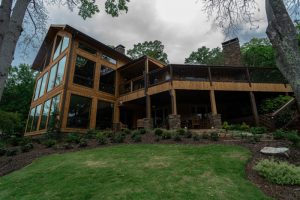 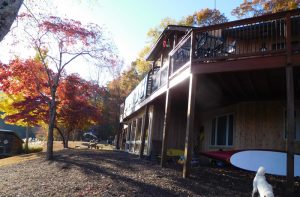 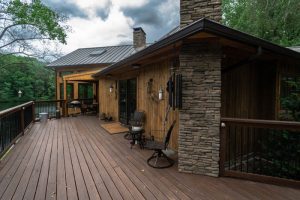 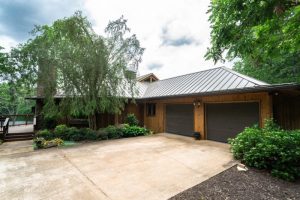 Top Left: The extended solarium; Top Right: Before; Bottom Left: A view of the new deck;   Bottom Right: The garage and side deck entrance.

Our clients expressed their delight: “Our desires have been beautifully addressed with our remodel. Dale’s engineer helped figure out how we could have huge three story windows. Atlanta Design & Build is an amazing company for doing extensive, complicated, design-intensive remodels!”

Enjoy watching the drone footage of this project’s exterior provided by TimberTown. 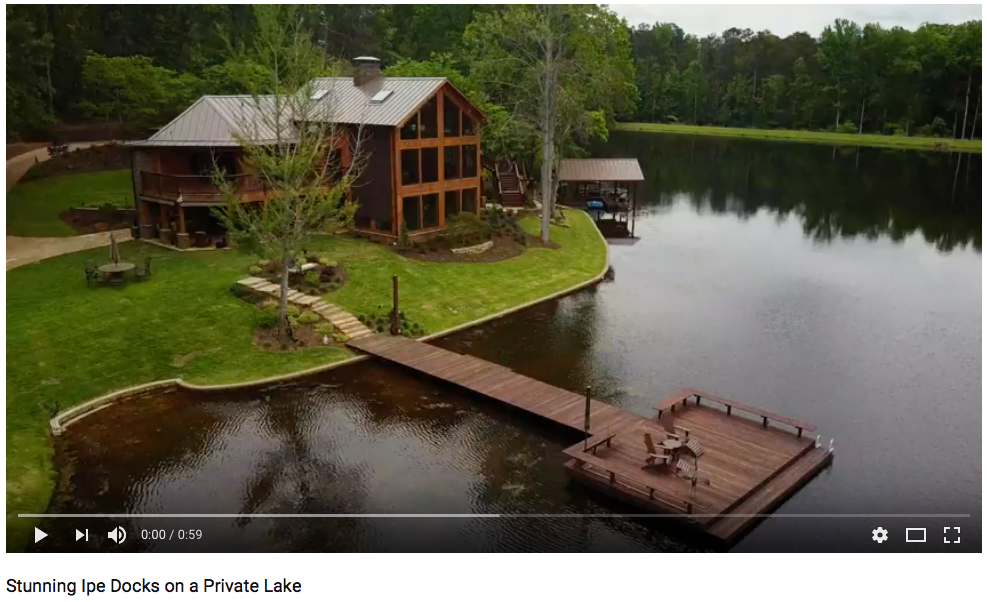 Review the dock and boathouse transformation here. Next up, part 3 gives you the pleasure of roaming inside the fabulous upper level of the home and we conclude the series by venturing inside the terrace-level to share this large project’s incredible design metamorphosis.

Sign up to receive our monthly eNewsletter, HOMEStyles Online, to be the first to receive updates from our team and gain inspiration for your next remodeling project.

Our Atlanta Design & Build team has received so many compliments from many of you regarding the “Raise the Roof” project featured in our monthly eNewsletter, HomeStyles Online, and blog series in 2017. We’ve decided it is time to begin a series highlighting another amazing project that our team recently completed for a client that lives on a lake: a dock, boathouse, gorgeous addition and home interior renovation. Watch the video below for the first part of the transformation: 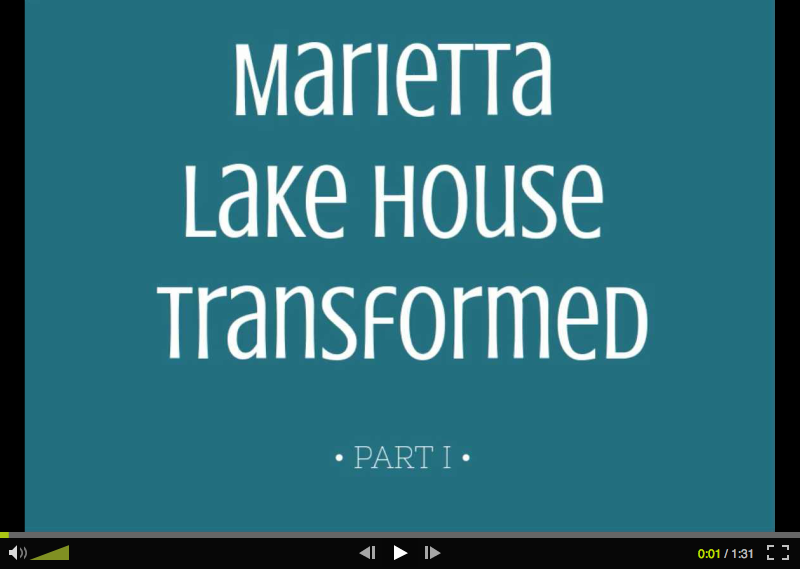