Thirty years ago, your grandparents’ porch would have originally been built on top of decks with general deck boards. This gave the porch an “added-on” look to the house, instead of what we now see as a wholly-formed, functional asset of the house. As the field has grown and materials have improved over the years, standards have changed in how homeowners view the concept of a porch’s presentation. What started out as plain deck boards morphed into plywood/carpet, which then transitioned into a tile setup that has now settled into tongue and groove (T&G) decking.

When porches were originally built with deck boards, they left gaps between the boards as they did not fully align. This resulted in an overabundance of bugs crawling up between the boards to investigate. The solution to this was stapling screens to the bottom of the deck and obstructing the easy access for insects. But what was thought to be a decent solution, actually resulted in an unhealthy, unattractive trap for all food, hair, and garbage that was dropped throughout everyday life. And with that brought to light, it was back to the drawing board for ideas.

Next up was installing plywood on the deck so that carpet could be placed over top. This allowed for a smooth and comfortable surface, perfect for bare feet. But soon the cons of using carpet began to outweigh the pros, as natural elements took their toll on it. The “shelf life” of carpet immersed in the outside world is much shorter than that of carpet used indoors. And because of that, carpeted porches began to see a decline. Allergens, such as pollen and dust, were trapped in its fibers, and rain (or water in general) sped up the degrading process of the plywood underneath.

Now, twenty years later, we find that T&G is the best option for a porch, specifically utilizing Brazilian hardwoods. This type of wood is more stable than your average American wood, as it will not buckle, warp, twist, or cup. T&G connects in such a way that removes the spaces found in the original plain deck-boards setup and stops the infiltration of bugs from below. It can get rained on without the fear of degrading materials, and with that beautiful, natural wood look Brazilian hardwoods can last from 50-100 years with little maintenance required.

As the past thirty years have come and gone, they have shown us the evolution of the screened-in porch. From its visual representation as a household “add-on” to a functional homeowner’s necessity, down to the technical advances of how materials have been designed to build an affordable yet well-designed space. If the past thirty years have taught us anything, it is that there is always potential for a bigger and better result of creativity, and that this is only the beginning.

Like most homeowners today, our clients love to entertain family and friends in their home. But, their small cozy den didn’t provide enough space to gather for special occasions. Extending their living space with a new Sunroom Addition was their desire, which involved the removal of the den’s exterior wall and their existing deck.

We are thrilled to have received a 2016 NARI-Atlanta Contractor of the Year (CotY) Award for this project in the category of Residential Addition Under $100,000. This award was given by NARI Atlanta, the local chapter of the National Association of the Remodeling Industry. Read about our other NARI-Atlanta CotY Award winners here.

Removing the exterior wall required installing an engineer-approved 600lb. steel I-beam to span the opening and support the second story. The work progressed very carefully during the wall removal and beam installation, since it was taking place directly beneath a recently renovated upstairs master bath. Absolutely no movement of the upstairs level could be allowed in order to prevent damage to the master bath tile and the second floor. Our team accomplished this flawlessly.

Due to ample new windows and a French door to their new deck, natural light floods the sunroom and also brightens the den. Natural oak hardwood flooring installed in the sunroom ties into the existing flooring, creating continuity with the rest of the home. 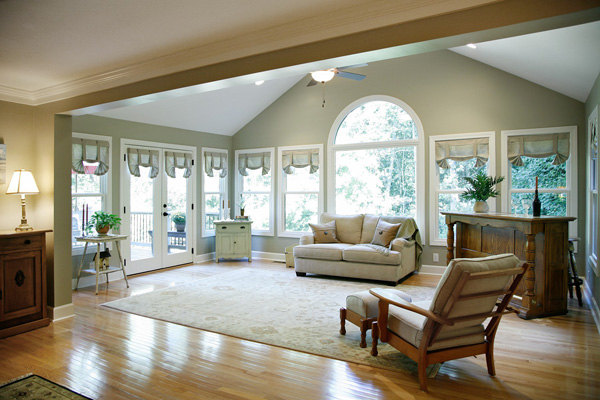