Join us in congratulating our Sales and Design expert, Steven Roberts. He earned his NARI Certified Remodeler (CR) credentials by meeting all the requirements for the CR designation. This includes a minimum of five years continuous experience in the remodeling industry with commitment to NARI’s code of ethics. Steven was also required to complete 16 hours of continuing education in the remodeling field. He then passed a one-day written exam covering general remodeling practices and business.

We are proud of Steven Roberts receiving his CR designation! This is one way to be assured that you have a dedicated, experienced professional working on your project.

At Atlanta Design & Build we know it is very important to protect the health of your family and pets during a remodeling project. We make it our top priority to maintain a clean and safe job site while your project is ongoing. One of the more serious hazards is the airborne dust that is stirred up by our work. This dust could migrate throughout your home and pose a problem to your health. We know the value and how important it is to contain and eliminate all types of worksite dust, which includes dirt, debris, organic matter, drywall, cement, silica and sawdust. Not only that, we are dedicated to protecting your personal belongings from the dust as reasonably possible. To that end, Atlanta Design & Build has developed an extensive dust control plan and best practices, investing in the newest dust control technology.

The following items are included in our dust control plan:

END_OF_DOCUMENT_TOKEN_TO_BE_REPLACED

As Atlanta Design & Build celebrates our 20th Anniversary this year, we also celebrate the 14 years we have been blessed with the diverse skills of our Director of Administration, Vicki Wadsworth.

Learning sales and management from a young age

Raised in the Midwest, Vicki Wadsworth received her BS degree in Business Administration from Baylor University, in Texas. She graduated  with a dual concentration in Marketing and Management. Upon graduation, she began her career with AT&T in Oklahoma in business sales. Recounting the course of her career, Vicki appreciates the extensive training and diverse opportunities afforded her.

She gives credit to her dad for the most impactful training in sales she ever received. Rising thru the sales ranks for General Mills, he retired as their Director of National Sales Training.  According to Vicki, he could sell anything! He also made sure his three children were managed in sales principles from their earliest years. “I was raised chewing on Zig Ziglar and his motivational sales tools,” Vicki laughed.

Her AT&T career included additional opportunities and relocation.  She became immersed in the world of computer programming upon successful completion of Programmer Basic Training and relocated from Oklahoma to Florida. Beginning in system administration and ending up in charge of online security programming for AT&T’s Core Billing System. Vicki stated she valued this IT segment of her career for the strategic thinking the training and assignments provided her.

While working in IT, Vicki also worked with the AT&T personnel department conducting campus interviews. Later, an opening arose requiring a sales & programming background. Vicki was offered a position with AT&T personnel as the Management Employment Recruiter for the state of Florida. She thoroughly enjoyed running the remote office hiring for sales, programming, accounting and engineering departments. In 1991 when company budget cuts were needed, she recommended closing the Orlando, FL location and moved to the AT&T southeastern hub in Atlanta, Georgia.

Moving, Marriage and Family——The beginning of a new chapter

END_OF_DOCUMENT_TOKEN_TO_BE_REPLACED 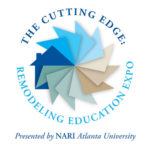 Our production crew received six CEU credits for their attendance at the Cutting Edge. Each team member came to the event with notepads in hand to write down “golden nuggets” that they gleaned from the event. Here are just a few: END_OF_DOCUMENT_TOKEN_TO_BE_REPLACED

H. Dale Contant was honored to be a guest presenter at WSB-TV 2’s Home Services “Lunch & Learn” Seminar on May 11th. Representatives from 40+ Atlanta-area businesses observed TV-2’s “Emerging Trends in Remodeling” presentation, while also hearing from additional subject matter experts on consumer trends, and marketing best practices, and more. TV-2’s event was the first in a series of similarly-themed seminars planned for 2016 by parent company Cox Media Group, each incorporating NARI into their guest panel of experts.

After graduating from high school, Sydney worked for five years as an apprentice under ADB project managers, Mike Pike and Jamie Franks. Mike and Jamie had her doing everything, from demo, framing, and trimming out, to decking and screened porches. Now she is a Certified Remodeling Project Manager (CRPM) running jobs on her own. Her favorite part of a project comes after the walls are up and the project is ready for all the cosmetic details. “I actually enjoy tedious work,” said Sydney. “I get great satisfaction out of giving our customers exactly what they want, giving them 100 percent.” END_OF_DOCUMENT_TOKEN_TO_BE_REPLACED